This list will give you an idea of visits you will be able to add to your holidays in Ireland. The visits are classified by city or by regions.The list isn’t exhaustive. We have tried to propose various visits to satisfy everybody depending on your hobbies. To have other propositions or suggestions, contact us and you will talk directly with one of our specialists of Ireland to make sure your visit to our country will be the one you want !

Evening at the pub with traditional Irish music
Irish music show, dance and songs
Visit of a brewery
Visit of a distillery of Irish whiskey
Seaweed bath

Collection of objects from the Mesolithic period to the end of the Middle Age in a 1890 neo classic building.

Oldest University in the country, founded in 1592, holds the illuminated manuscript considered by many experts to be the most beautiful of the Irish Middle Age.

Longest nave church in Ireland, the building dates back to the 13th century. The interior of the cathedral is decorated with many materials and items from the past including the tomb of the cathedrals most famous deans, the writer Jonathan Swift.

Building closed as a prison in 1924, today used as a museum. Many of the most famous and influential Irish rebels have been incarcerated here. A very interesting visit, that will help you understand the complexity of Irish history.

Dating back to the 18th century, they are spread out over 20 hectares and hold more than 16 000 plants.

This museum is based on the grounds of an old airport where the first seaplanes from the 30’s and the 40’s that linked Europe and America landed and took off. The museum holds a part dedicated to the Irish coffee as this is where it was first created.

Conserved and managed by local people, it dates back from the 1800’s and it is still used.

Discovered in 1983, they are more than a million years old. We can see, among others stalactites and stalagmites. This visit is suitable for all climates!

The city was founded in 1303 and has many attractions : 15th century castle ruins, a 1888 monorail, a literary centre…

Originally built to exhibit the Kerry poneys, we now find many examples of 19th and 20th century thatch houses, old tools and objects. Just beside is the Red Fox Inn pub specialized in the making of Irish coffee !

Superb demonstration of the gathering of sheep done by a local shepherd and his dogs, border collies. The shepherd presents also different breeds of sheep from around the world.

Common in the Irish landscape, they are 3 metres wide and 6 metres high walls built as circles. They were inhabited by families during Iron and Bronze ages.

Situated in an old school, it holds exhibitions on the history of the island, on the fossilised tetrapod footprints discovered 20 years ago, and on the first telegraphic transatlantic cable, that was set here in 1866.

It tells the story of the Skellig islands, two islands classified by the UNESCO that where inhabited by communities of monks from the 6th to the 12th century and migratory birds who come to nest on them.

Dating back from the 17th century, it was the home of one of Irelands greatest sons, Daniel O’Connell, 19th century politician nicknamed “the liberator”.

19th century building; it was made famous during the visit of Queen Victoria. Today it’s a museum decorated like it was in the past, the manor is also known for its rhododendrons and azaleas garden (blossom may-june).

Typical 15th century Tower House, Ross castle is situated near Killarney city, on one of the lakes of the park.

Big aquarium, whose task is conservation and preservation of many examples of marine fauna. It holds sharks, penguins, lobsters, turtles, eels…

During an hour, the boat travels along Dingle pier waiting for Fungie, the wild dolphin who appeared for the first time in the bay around  1983.

On the East of the town of Dingle, on the Slea Head road are the Blasket Islands. They have been inhabited for centuries until abandoned in the 50’s. This centre, located across the islands recalls the literature, the life and the language of their inhabitants.

Small chapel made in dry stones dating back from the beginning of the evangelism, it is noteworthy for its shape as an upside down boat but also for its importance to religion.

Ancient jail totally restored, the museum recalls the hard life of the prisoners and the story of the radio.

Last stopover of the sadly now infamous ship, Cobh was also an important pier during the Irish emigration waves. The museum is located in the old offices of the White Star Line and, using the last audio-visual technology, recounts the last moments of the ship.

Built 600 years ago by the important chief of a clan, today it lays in ruins, it attracts visitors from all around the world. The “magic” stone at the top of the castle might have something to do with it.

Fota House and its gardens

The building of Regency style is surrounded by gardens and by a 19th century arboretum. Not far from it, the wildlife park of Fota is very much associated with animal reproduction.

A few minutes away from the town of Glengarriff by boat, it spreads on 15 hectares and has been transformed in exotic garden at the beginning of the 20th century by a rich businessman. During the crossing, you will be able to admire the landscapes and some seals.

Bantry house and its gardens

Style Queen Ann house, made around 1700, the manor is a museum holding a rich collection of furniture and works of art brought back from Europe. The gardens, other attraction, are Italian style, with a basin at the centre and a view on Bantry bay.

Kylemore Abbey and its Victorian gardens

The manor, today an abbey, was built at the 19th century by a man, to show his love for his wife Margaret. The visit includes a part of the abbey, its park, the gothic church copied on English cathedrals, and 19th century gardens.

Located between the two man lakes of Connemara, Cong was used as a setting for the movie « the Quiet Man ». First the site of a monastery then of an Augustinian abbey but also of a castle transformed today in a luxury hotel, Cong seduces every person who goes there.

It holds an exhibition and a video on the flora and fauna of the park but also walking paths of different levels. There, you will find yourself in the middle of that scenery made of boglands, hills, rivers and lakes.

During 90 minutes, you will sail on Ireland’s only fjord. Information on geology and history are given on board. During that time, you will be able to have lunch, drink an Irish coffee and/or just admire the landscape.

The bodhrán is a typically Irish drum. Located within the walls of an old franciscan monastery, this museum will plunge you into Irish music. 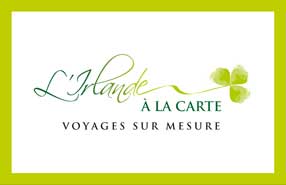